The Watershed cinema on Bristol’s Harbourside has a reputation for screening creative and subversive films. Lanthimos’ Killing of a Sacred Deer fits well in this setting and the film does not disappoint.

It follows Steven (Collin Farrell), a surgeon who has a bond with the son of a patient he failed to save. It becomes clear that this boy (Barry Keoghan) is not who he seems and has a sinister plan for Steven, his wife (Nicole Kidman) and their two children.

It opens with a graphic long-shot of a beating heart and sets a sinister, insidious tone which is sustained throughout the film. Prepare for two hours of feeling a creeping sense of unease, accompanied by the frustrating feeling of not being quite able to put your finger on exactly why. Is it the stilted awkward dialogue, which gives a vaguely dystopian aura to this strange world? Or is it the jarring, dissonant orchestral soundtrack that dips in and out like waves threatening to break? Despite the intensity of the film, it is littered with moments of very funny, yet deeply dark humour. A well-rounded film.

Barry Keoghan (Dunkirk) shines in his role as Martin, the psychopathic antagonist. 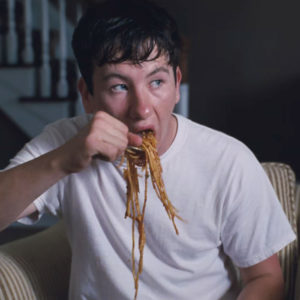 His performance perfectly balances the contradictions of his character. He’s gormless yet charming, innocent yet inherently evil. His strange power to curse Steven’s family is never explained, which adds to the mystery of the character. There is a gut-churning moment when Martin explains his twisted, eye-for-an-eye version of justice with a bloody “metaphor”. He bites a chunk out of his own arm after doing the same to Steven. I believe villains are only truly terrifying when they are convinced that they are the virtuous one. Barry is not out for revenge, in his mind he is giving out fair, logical justice and Keoghan portrays this excellently.

Lanthimos chooses for the characters to interact in an un-naturalistic, formal, almost wooden way. The film is heavily stylised, which is slightly difficult to accept at first but overall it really adds to the atmosphere. Everything seems clean and clinical, including sex and nudity, and the script is emotionless, using intentionally flaccid language; the word “nice” is used a lot. However this does not mean the characters are devoid of emotion, on the contrary. Emotion takes place under the surface, in facial expressions and more interestingly, in the soundtrack. The orchestral music fits perfectly and covey’s characters emotions and relationships more than words might be able to.

The conflict in this film comes between logic and chaos. In a formal, step-by-step, medical way, the characters try to control the chaotic and illogical world around them. This adds to the dark humour, as often, in the real world, these situations would provoke an emotional response. Instead, when confronted with Martin’s evil ultimatum, Anna’s response is: “the most logical thing is to kill a child.” Killing of a sacred deer focuses on the medical profession and explores the dangers of treating a human life with objectivity rather than compassion. It’s shocking, unsettling and will play on your mind for days after watching.